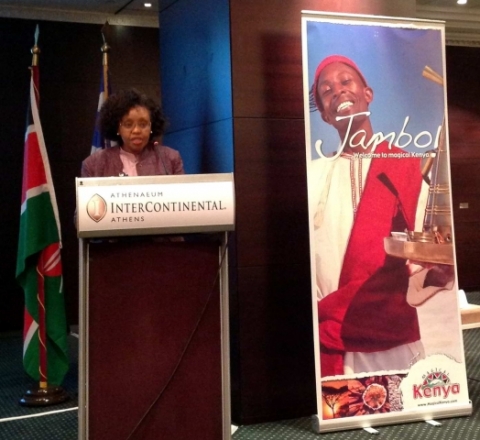 H.E. Cabinet Secretary of East African Affairs, Commerce and Tourism of the Republic of Kenya Mrs. Phyllis Jepkosgei Kandie visited Hellas after accepted official invitation by Hellenic Government at early November 2013. During her visit, Mrs. Kandie met with governmental officials as well as with business bodies from private sector.

Mrs. Kandie had meetings with:

1. the Chairman of the Standing Committee on National Defense and Foreign Affairs of the Hellenic Parliament Mr. Konstantinos Tsiaras and the Vice Chairman of Inter-Parliamentary Greece - Kenya Friendship Group Mr. Spyros Lykoudis:

During the meeting, it was mentioned by the Hellenic side that Greece keeps a positive attitude towards Kenya and the hope was expressed that bilateral relationships will flourish soon.

During the meeting the both sides discussed the possibilities of the development of economic relations between Kenya and Greece especially in the industries of tourism, constructions and renewal energy.

It was agreed by both sides the drawing of a Memorandum of Understanding, which will contribute to tighten further the relationship between Greece and Kenya in the sectors of production, processing and trade of agricultural products.

Both sides are willing to sign a cooperation agreement in tourism. During the meeting the possibilities of cooperation were discussed especially for special types of tourism as congresses and cruises. There is a special interest for for transfering know how in tourism education and preserving cultural heritage.

During the meeting both sides agreed to develop bilateral trade and cultural relationships as well as for transfering know how in the fields of agricultural products, tourism, transportation, investments and culture.

6. the Management of Piraeus Port Authority:

The official meeting with the management of the Piraeus Port Authority mainly concerned the cooperation between the two countries in terms of shipping, cruise and port infrastructure. The two sides as stated by the President of the Pireaus Port Authority, Mr. George Anomeritis, agreed that through the Embassy of the Republic of Kenya in Athens, to set up a joint committee of experts whose main issues will concern: (a) the cooperation of port authorities of Piraeus and Mombasa concerning infrastructure and expertise, (b) matters of freight of Kenya to European countries through the portal of Piraeus and (c) the cooperation concerning the cruise with Piraeus Port Authority and MedCruise.

During the meeting the possibilities of bilateral trade relationships were discussed as well as matters of cooperation in trading fresh products (fruit and vegetable, meat and fish) and transfering know how in organisation and management food parks.

H.E. the Cabinet Secretary accompanied by the Honorary Consul of the Republic of Kenya in the Hellenic Republic visited Tripolis, Sparta, Gytheio and stayed in the Hotel "Xemoni" in Oitylo. She also visited Mani and Kalamata where get familiar with the excellent quality of the wines of Inomessiniaki company of Mr. Vangellis Xyggoros.